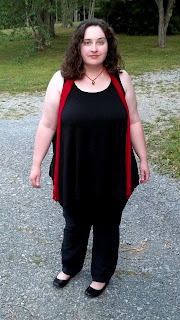 So I went to my concert last night and it was great! I highly advise all of you to go see Gillian Welch if you're lucky enough to be in a city on the rest of the tour. In case you didn't click on any of my myriad links leading up to the concert, Gillian Welch (the band) is made up of Gillian and her partner David Rawlings. As for what their music sounds like, Gillian joked last night that they were the acoustic version of slowcore. And yeah, their songs are bleak, but when I describe them, I say they're alternative bluegrass. Their setup last night was just the two of them on stage with their instruments. And they are two people with the least stage presence I have ever seen -- but they are oddly hypnotic to watch. Because they're making the music for themselves as much as for the audience; they are musicians rather than performers. David makes truly odd faces and movements while playing, Gillian mostly looks off into the distance or down at her guitar -- it's oddly intimate to watch while also completely unrevealing. They've played together for decades, so the two of them rarely look at each other while playing, and they also rarely look at the audience directly. But they play the shit out their songs. Gillian sings a low alto and David a high tenor, and when their voices blend...it's eerily beautiful, almost fey. But they're both bonily awkward onstage. It was just the oddest, most enchanting juxtaposition to watch. And if I had the money and time, I would follow them around the country like a Gillian Welch Deadhead.