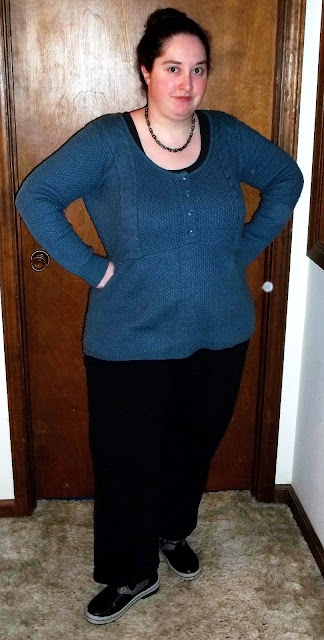 So this outfit looks totally normal, right? Big rain/snow boots because we had sleet in the morning and rain the rest of the day, but non-adorable footwear aside, it looks normal. I was at my gyno's getting ready to walk in the office, when my dad leans over and tells me I have a rip in the side of them, on my right upper thigh. I manage to fix that with a stapler in an empty office and feel pretty pleased with myself.

THEN AT THE END OF THE DAY, I'm in the bathroom peeing (not for the first time, since I'm not a camel), and I look down and see a giant rip in the crotch! I am of course wearing bright pink panties. These are not actually a pair of work pants, they're a pair of pants that I KNOW need to be fixed. But I'm too freaking lazy (and bad at sewing), so I've put them on a pile of things to ask my mother to fix.

And yet somehow I picked them up this morning, put them on and never noticed either the rip on the side or the GIANT HOLE in the crotch until later in the day. Luckily, the rip in the crotch is directly in the crotch where no one can see, so at least I was spared that embarrassment.

Please, share some similar embarrassing stories so I don't feel like quite such a doofus. (And send me some luck, because I'm going to have a D & C on Thursday for uterine bleeding issues.)
Posted by Erin at 10:12 PM

Labels: not my best moment