Hahaha!  Who I am kidding?  I don't need any help.  I don't work today, so I am an organizing fiend!  I organized two, count them, two whole things today already!!!  (For me, this is akin to say....200)  I lust after organization.  I am Miss Organization at work.  At home...my room is very much like a trash heap (if you substituted clothes and books and such for garbage.  I'm not a freak, you guys).  My jewelry making corner has slowing been growing and growing and growing out of control.  I was looking at issues of Real Simple, the magazine of beautiful highly priced organization porn, when I saw one of those wire rack cubby things.  And I thought, "Didn't I have one of those when I lived in Kansas?"  So today I went downstairs where all the stuff I still haven't unpacked lives and I FOUND it!  So after a sweaty, curse-filled re-assembly, I was able to put all my little bead/findings boxes away WITHOUT them overflowing the cubby!

And then I tackled my belts.  Even though I've only recently started wearing belts as accessories, I had a huge jumble of them.  24 to be precise.  This included belts that didn't fit, were falling apart, etc.
Once again, I thought I had something that would help.  In this case, I was wrong.  So I raided my father's closet, and stole his long unused belt hanger.  I put aside 8 belts for Goodwill, leaving me only 15.  (I know, it's completely too many for how little I wear belts.  But I already have them!  It's not like it's costing me money to keep them.)

I even put them in order of shortest to longest!  I totally deserve a gold star.  The scarf/ribbon type belts went in the very center and my two thick belts that have no real buckles got draped over.  Want to see what a belt hanger looks like up close? 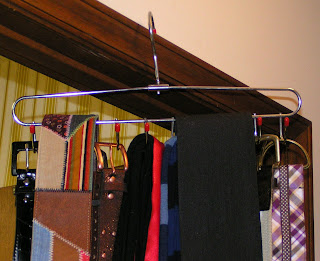 Woo Hoo!  I can find stuff in 2 more areas now!  And Jen's updating the store later today, so check in and have a look see!
Posted by Erin at 11:44 AM