My boss has recently declared that as long as we don't have a meeting on Friday, we can wear jeans and boots. (This is a big step for her.) I went all out with the necklace layering, something that I still feel unsure about until someone compliments me on it (my sister, this morning) then I can cope with it. For some reason, I'm always convinced that I've piled on way too many necklaces and I look silly. My hair needed a day without gel, so I went with double headbands instead. Just to make you all cry, I've never had split ends, but I pride myself on having very healthy happy hair. So I never blow-dry and I haven't done anything chemical (perms, dyes, etc) in five or so years. 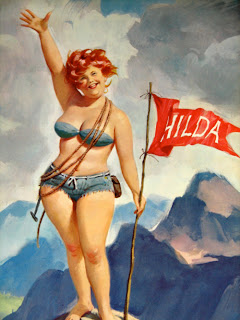 As for links, I've really grown to love Hilda, the plus-size pinup drawn by Duane Bryers. He reportedly did about 250 different paintings of this character for calenders/playing cards/drinking glasses/etc. They've shown up on Pinterest a lot lately, and I just found a tumblr of them! 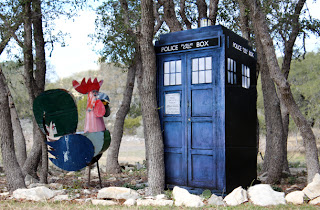 If you don't follow the Bloggess, you should. Odd, sarcastically funny, and often willing to talk straight about mental illness, she is the humor voice for a my generation-ish of odd dorky people with mental problems (aka me!).


Alice Bradley (Finslippy) has an excellent post that Sally linked to today. On the off chance that anyone reading me doesn't read Sally, check out this fantastic/horribly true post. "As a young woman, I was certainly the least intimidating creature on the planet, and as such I was prey to unwanted attention from men, attention that ranged from annoying to truly scary. I know there are people who dismiss the idea that such attention is upsetting--after all, isn't it flattering that strangers think you're attractive? But it goes far, far beyond that. It was endless and exhausting and I don't think it has a thing to do with how pretty you are. In fact I often felt the comments would come fast and furious on the days I felt particularly bad about myself, like I was giving off signals or hormones, like they could smell my weakness." She talks about being glad she's in her 40's now, and wanting to be intimidating to avoid the pervy/unwanted attention that the average woman endures everyday.