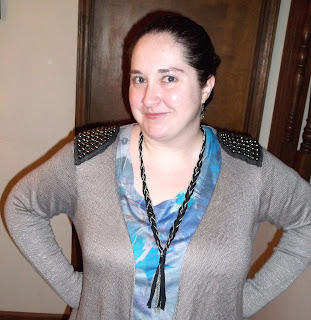 Evidently my new cardigan feels like being fancy; hence the epaulets and general sleekness. I am feeling exhausted lately, and it's been showing in my clothes (aka the outfits I don't show - thrown together with pissed off sleep face). I'm happy it's fall, don't get me wrong, I just wish I was getting up an hour later. Also, an annoying person I know is being annoying. But - great (new to me) British show Luther has started it's second season! Why are most British shows so much better than our crap tv? Are we really that annoying and stupid as a nation (see all reality shows and most "comedy" shows), or do they only show the best on BBC America? Probably the latter, but still, it makes me feel very sad to be not-British. They win automatically anyway for Doctor Who.